While working on the game Front Line Zero with the METATEK game developement studio, I’ve used the Unreal Engine 4 game engine for some years now.

I’d like to share some knowledge about the pitfalls and neat tricks I got to discover under the form of short, easily-readable blog posts.

Today’s topic : how to play a random animation from a predefined list.

I’m currently researching how to work with the animation blueprint system of UE4, and it takes a lot of trial and error to test out some simple and more complex use cases.

While doing this, I realized some of the things I assumed would be braindead easy to do in Unreal turned out to be very convoluted, so to speak.

The Animation Blueprint is one of those tools that seem to me to be good at two things :

So there is a whole galaxy of « kinda common use cases » in the middle that the tool doesn’t always address in a very straightforward way.

In my experience, Unity Animator, in comparison, feels much more « to the point » as it lets you « get it done » faster. But I digress.

My use case was a very simple one.

As you may know, the mannequin provided by the UE Animation Starter Pack has three different « default » death animations (Death_1 / 2 / 3).

So playing a death animation is indeed dead (ah !!) simple : 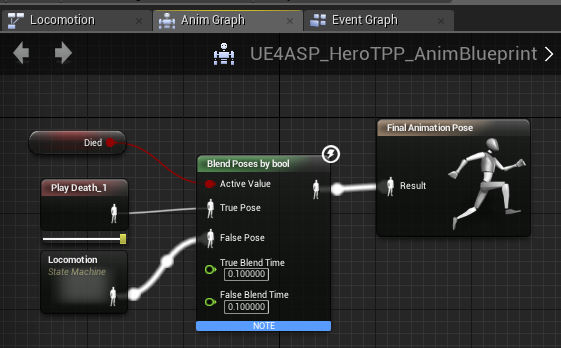 What if we wanted to pick a random death animation between the three available ones ? This is where all hell breaks loose.

Most of the usual BP control flow nodes don’t work the same way in the Anim Graph. We’re manipulating animations here, not « control flow » per se. So a lot of your initial ideas to implement it Just Won’t Work™.

Plus, a lot of the advice you’ll get is to learn a bunch of complex animation tools like Animation Montages or other more or less shady animation BP tricks. Documentation is lacking at best, and a lot of useful information is buried in hour-long videos on Youtube you don’t care to watch.

Picking a random death animation shouldn’t be (or feel) that hard to do… What if we’re lazy and don’t want to deal with an anim montage or whatever « just for that » ?

After a lot of trial and error, I think I found a rather easy solution to work with that I’m satisfied about enough. It isn’t very flexible, but perfectly suits my current use case, so here goes :

The careful reader will think « Death Anim Number » is a bit of a misnomer (for a lack of a better name), and you would be right, because Random Integer in Range returns a number like this : Min <= number <= Max. Which means if you want to pick between 3 anims, Death Anim Number should actually be 2 (so it can pick 0, 1 or 2). Keep that in mind !

(As you may know, There are two hard things in computer science: cache invalidation, naming things, and off-by-one errors.)

Right-click anywhere in the anim graph to create a Select node.

Select nodes have no type by default (a wildcard type) so that anything can be plugged to them. But how can we plug animations into a Select node ? We need to go through some steps, and I’ll assume here that we know in advance all the animations we want to select from. 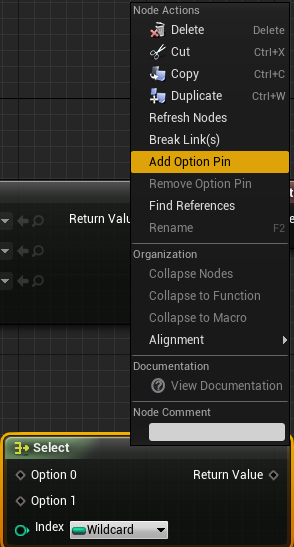 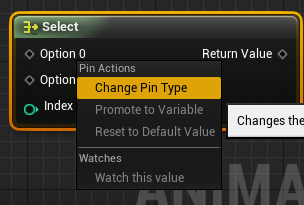 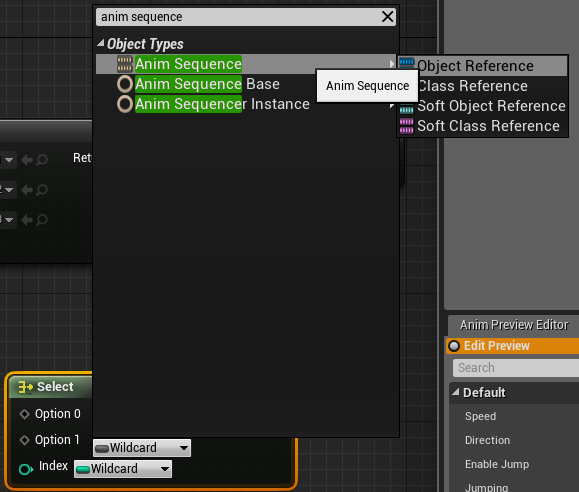 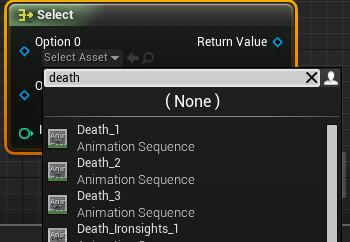 Works like a charm ! Every instance of this animation blueprint will then choose a random index on begin play and then play the matching animation on death. I am very aware this is kind of a hack (what if we had thousands of them ?) and not very flexible, but it suits my simple use case very well.